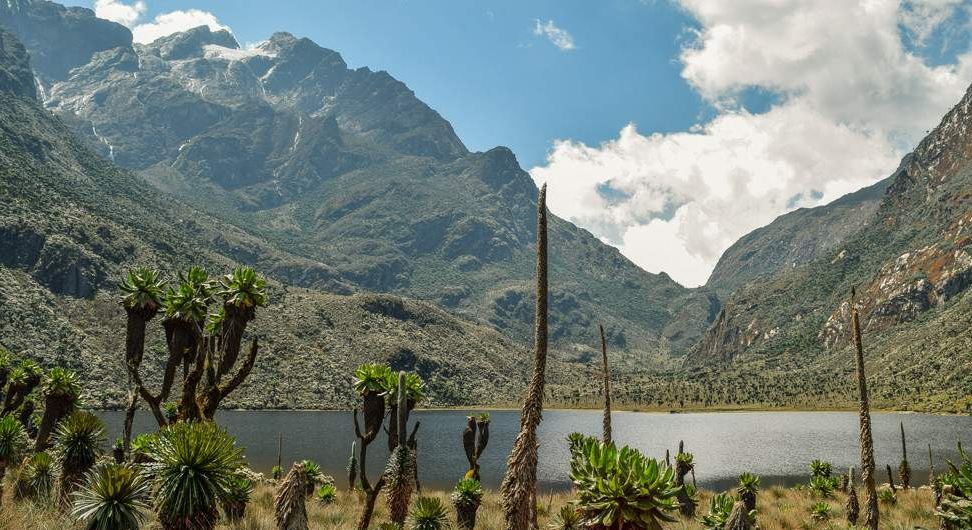 Meaning ‘rainmaker’ in the local language, the Rwenzori was declared a UNESCO World Heritage Site in 1994 because of its exceptional natural beauty. It’s Africa’s tallest mountain range with 6 snow-capped peaks.

The range is about 120km long and 65km wide. It offers hikers breath-taking mountain scenery of glaciers, lakes, rivers, waterfalls, and alpine forests to trek through, as well as spotting an extraordinary number of unique flora and fauna.

Rwenzori Mountains National Park’s three highest peaks are Margherita at 5109m, Alexandria at 5083m and Albert at 5087m, all on Mt Stanley – Africa’s third-highest mountain – after Mt Kenya and Kilimanjaro.

Rwenzori Mountains were coined the Mountains of the Moon, by a renowned Greek geographer Ptolemy, who proclaimed them to be the source of the Nile – the world’s longest river that runs through the hottest desert on earth.

Where Are The Rwenzori Mountains?

Rwenzori Mountains National Park is located in western Uganda on the eastern side of the western (Albertine) African Great Rift Valley. This is about (320 km) 7 to 8 hour drive from Uganda’s capital city, Kampala. Rwenzori National Park covers an area of approximately 996 km (99,600 ha) of which 70% lies at over 2,500 m in height.

The park lies just a few kilometres from the equator, where it is contiguous with Congo’s gorilla trekking destination of Virunga National Park, also a UNESCO World Heritage Site. It is situated in the Bundibugyo, Kabarole, and Kasese districts, 25 km from the small city of Kasese.

A Rwenzori Mountains trekking tour is truly unforgettable. Rwenzori supports a unique combination of climatic zones that take you on the equivalent of a trip from the equator to the arctic pole in just a few days. Because of their altitudinal range, and the nearly constant temperatures, humidity and high insolation, the mountains support Africa’s richest montane flora.

The natural vegetation has been classified as belonging to 5 distinct vegetation zones, determined largely by altitude and climate.The higher altitude zones is a unique pristine landscape of alpine vegetation that extend from around 3,500 metres to the snow line. This zone represents the rarest vegetation types on the African continent.

It is studded with charismatic giant lobelias, groundsels, and heathers which have been called “Africa’s Botanical Big Game”. Much of what you will encounter on a Rwenzori Mountains National Park hiking safari in Uganda is found nowhere else on Earth!

Rwenzori Mountains National Park fauna includes about 70 species of mammal and 217 bird species, several of the latter being endemic to the Albertine Rift Valley.  Most of the birds are in the forest zone and the most sought after bird here is the beautiful Rwenzori Turaco.

Rwenzori National Park is also the only Uganda safari park where the Angola colobus monkeys has been recorded, though identification of this localised species will require careful examination as the similar and more widespread black-and-white colobus also occurs on the mountain.

The only other mammal you’re likely to see in the forest is the blue monkey, but elephant, buffalo, golden cat, servaline genet, chimpanzee, yellow-backed duiker and giant forest hog are all present. At night, the forest resounds with the distinctive and eerie call of the southern tree hyrax. Mammals are scarce above the forest zone.

Despite being close to the Equator, the highest peaks of the Rwenzori Mountains National Park are perennially snow-covered and support gorgeous glaciers. The term “glacier” is derived from the French word glace, which means Ice.” Glaciers are masses of ice located at the earth’s poles or atop Africa’s highest mountains of 5000m above sea level.

However, an ongoing concern is the impact of climate change on the Rwenzori Mountains National Park glaciers. And if you are planning to climb Rwenzori to witness its snow, you should do it as soon as possible. A United Nations-backed report released on October 19th, 2021 reveals Africa’s Rare Glaciers on Kilimanjaro in Tanzania, Mount Kenya, and Rwenzori will completely vanish in 2040 due to human-induced climate change.

The most famous are Bakonzo, the Bantu-speaking people and agriculturalists who inhabit the Ruboni Community and other areas on Rwenzori foothills. They are agriculturalists and are popularly known for their stocky build and hardy nature. Their origin is not well known. It is said that these people migrated westward from Mount Elgon, not settling anywhere until they found a similar montane environment to cultivate.

Legend also has it that, the founding ancestor of Bakonzo emerged from one of the caves in the Rwenzori-oddly echoing the prevalent creation legend among the Bagisu People of Mount Elgon.

Like the Bagisu people, the Bakonzo have no preeminent leader but are divided into several small clans each of which is associated with a particular spur on the Rwenzori Mountains foot slopes. Bakonzo believes in their principal god, Kitasamba whose name may not be spoken on the mountain. He resides in the snow-capped peaks of the Rwenzori.

Things To Do In Rwenzori Mountains National Park

Trekking/climbing/hiking the green, mist-shrouded Rwenzori Mountains National Park is like stepping into a wonderland.

It’s an incredible Uganda safari adventure that will stay with you forever! The mountain trekking routes are uncrowned, the views stunning, and the vegetation are like nothing you’ve ever seen before! We definitely feel that hiking Rwenzori Mountains National Park is one of the best adventure activities in Uganda!

The Rwenzori Mountains offer more challenging and exciting climbing, though Mt. Kenya and Kilimanjaro are higher.And there number of trails for both short hikes in the lower areas of the park and long treks to the snow-capped peaks.

One hiking trail starts at Kilembe (Kilembe Trail) in the south and the other at Nyakalengija (Central Circuit Trail), which is about 20km further north. These mountain trekking trails pass through a fascinating succession of attitudinally defined vegetation zones, ranging from montane rainforest to Afro-alpine moorland, and the scenery can be breathtaking.

Unlike on Mount Kilimanjaro, normal Rwenzori hikes stick below the snowline (around 4,500m), which reduces the risk of altitude-related illness, but the glacial peaks are accessible to experienced technical climbers.

At the other end of the commitment scale, you have limited time, money or stamina can choose from a number of day or short overnight hikes through the forested slopes above Kilembe or Nyakalengija. You can also head up to Fort Portal and follow the Northern Rwenzori mini-hike between nearby Kazingo and Bundibugyo.

Compared to popular treks like Mount Kilimanjaro, the Rwenzori Mountains are a fraction of the price and – in our opinion – no less impressive. If two people are travelling together, the price of a trek ranges from USD $375 USD per person for a 3-day trek, to USD $2,000 per person for a 10-day trek. Per person prices decrease slightly when you have a group of 3 or more.

The tours below showcase just some of what is possible. Use these itineraries as starting points, or to draw inspiration. Then get in touch, and let our expert team help craft the perfect itinerary for you.

The Rwenzori Mountains in Uganda are home to about 220 bird species, including 19 Albertine Rift endemics, with habitats ranging from high elevation forest and open montane grasslands, to peat bogs, snowfields and glaciers.

Most of the birding in the forest zone and the most sought after bird in the Rwenzori Mountains is the beautiful Rwenzori Turaco. This species being best spotted here is one of the reasons the park features on birding tours in Uganda. Other special bird species to see in Rwenzori include:

You can explore the Ruboni Village to experience the cultural traditions of the Bakonzo people that have lived on the foothills of Mount Rwenzori for centuries. It is the Bakonjo which gave the mountains the name “Rwenzori” which can be translated loosely to mean “rainmaker”. Many of their beliefs, traditions and customs evolved from the mystery of mountain ranges.

During the village cultural walk, you’ll learn about their way of life, the crops that they grow, livestock that they keep, their art and craft, not forgetting impressive music, dance and drama. You can meet the village blacksmith, the medicine man, storyteller, women crafts makers, and farmers.

Before or after hiking Rwenzori Mountains, there are several lodges, hotels, and camps where you can stay – ranging from Budget, Midrange to Luxury Uganda safari accommodation, located in the foothills of the mountain.

While on the Rwenzori hike, the only option is basic wooden mountain huts that are perfect for keeping out the worst of the weather and for storing equipment required on different sections of the trail. Several huts with bunk beds (dormitory style) and mattresses are located at strategic points along the trekking circuit.

How To Get To Rwenzori Mountains National Park

Alternatively, the road journey from Entebbe or Kampala, via Fort Portal takes 6-8 hours. If coming from Queen Elizabeth or Kibale National Parks, the journey takes about an hour. Bwindi Impenetrable National Park in the southwest corner of Uganda (home to the mountain gorillas) is about a 6-hour drive.

You can visit the Rwenzori Mountains National Park any time of the year and have a fantastic Uganda safari experience. But if you wish to go mountain trekking, the drier seasons are the best time to visit Rwenzori.

The rainy seasons make the mountain t more slippery and the summit might be blocked by snow. The drier and optimal hiking months in the Rwenzori Mountains National Park are July and August and December to February

Fortunately for those of us who don’t like crowds, the Rwenzori Mountains are never very busy. You can’t even really speak of a ‘peak season’. So feel free to book a trek in one of the drier seasons without worrying about overly busy trails.

If you want to climb this majestic mountain, book a Uganda tour during the dry season. Contact us at Tulambule Uganda safaris and we will help you plan your adventure. Rwenzori Mountains National Park is definitely a must-see!